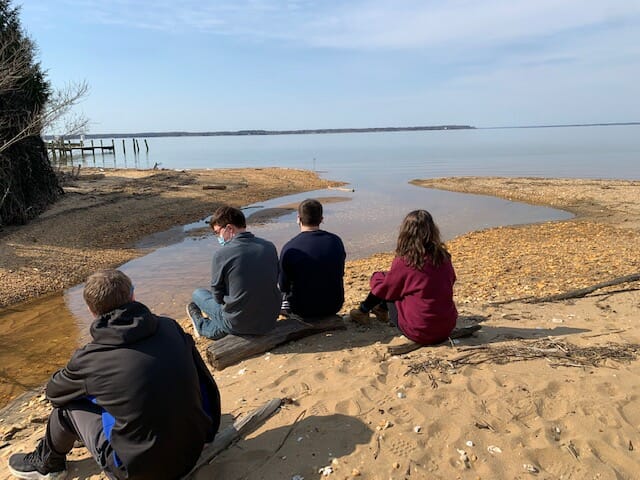 The 2020-2021 FVMs
Live across the block from a guest named Hector
And receive guidance from Katie Sullivan and Emma Edwards
Because they’re the program directors
Our site supervisor is Michael Duffy
Now I had hoped for better
I’m only kidding, on the inside he’s very loving
Which is why guests ask to speak to him
On a daily basis
But when you hand him the phone at the Inn
You’ll hear him talk and think, “How could you say this?”
Over in Durham is our Brother, Hugh MacSherry
We recently met up with him over zoom
To hear about how he is faring
He doesn’t have FVMs right now
But he doesn’t go it alone, he has Shakira
Who helps him press on
He always plays Waka Waka through his earbuds
Because it’s easily her best song
In August, new volunteers will join him for a year
And he’ll feel Lonely No More
They’ll embark on the voyages he has in store
Which will hopefully include a visit to the retreat house
known as Bon Secours
Outside of Katie, Emma, Michael and Hugh, there are four of us FVMs
And we will all part ways in July
David, Liam, Deaynna and I
It feels like yesterday we pretended to work for Santa
And I’ll surely miss David, Liam and Deaynna
Fortunately, we still have a four day mystery ride
To look forward to, otherwise known as a retreat
Hopefully we can avoid a repeat
Of what happened after we left the Potomac
I didn’t want to ask Michael for directions on the way back
Because I wanted to let everyone sleep
We took a detour and wound up crossing the Delaware River
And we passed Emma on the way to New Jersey
We only have one more retreat with her
One last chance to focus on the one who’s most worthy
Our first priority on the retreat is to glorify our savior
Afterwards, we’ll find an ice cream shop in the region
Since we are no longer in the Lenten season
We can all enjoy our favorite flavors
We’ll surely embrace the final stage of our mission
And I’ll strive to live out my values
Many of which I learned from the Franciscans